Hajipur is named after the founder Haji Ilyas shah, the king of Bengal who rules from 1345-58 AD. The beauty of rivers like Ganga, Gandak and Narayani have given this place an elegance. 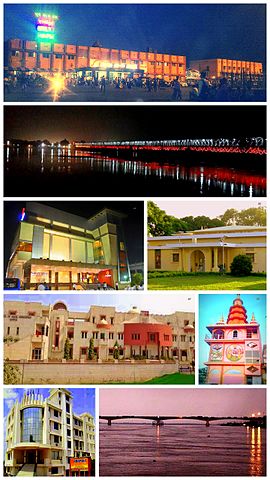 In ancient times it was known as Ukkacala  and was the first place to come after crossing river Ganga at Patna. Hajipur was an important places as lord Buddha has given some of the important discourses here, Also, Ananda’s ashes, the close disciple of Lord Buddha, is enshrined here.

Let’s check out the places you must visit in Hajipur while you are touring.

Kaun Hara Ghat: One of the major ghats on the bank of river Ganga-Gandak.
This is a very interesting name in itself and even more interesting are the legends associated with it. The two most believed legends are as follow.

1. It is said that there were two brothers, the elder one was very down to earth and good human being while the younger was a evil. In the next birth the elder one was born as the Gaj (elephant) and the younger one was born as the Graah(crocodile). One day, it so happened that the Gaj went to take a bath in the river, the Graah took hold of him. Gaj was a devotee of lord Vishnu  and so prayed to help him free. Listening to his prayers, lord Vishnu appeared, freed the Gaj and killed the Graah. The name Kaun hara (who lost) may have come from here.

This incident has a deep relation with the culture of the city as one can see the depiction of Gaj and Graah on the dome at the railway station and many other places in Hajipur.

2. River Ganga flows from west to here and Gandak from North and their confluence here forms a right angle, that is called as Koundhara in hindi. It is believed that with the time, Koun became kaun and dhara became hara! Koundhara was the name given in around 5th century and with the style of speaking changing with the time, it is quite acceptable that Koundhara is now Kaun Hara.

Whatever, name is true, it is one of ghats where many Hindu rituals including the cremation is performed.

Mahatma Gandhi Setu: The setu (bridges) over the river Ganga connects Hajipur to Patna city. The length of 5575 meters makes it the longest bridge in the world. This long bridge is supported by 48 pillars. A visual treat to eyes, the bridge is a fine example of the wonderfully crafted architecture and an example of the workmanship. It was created in 1982. 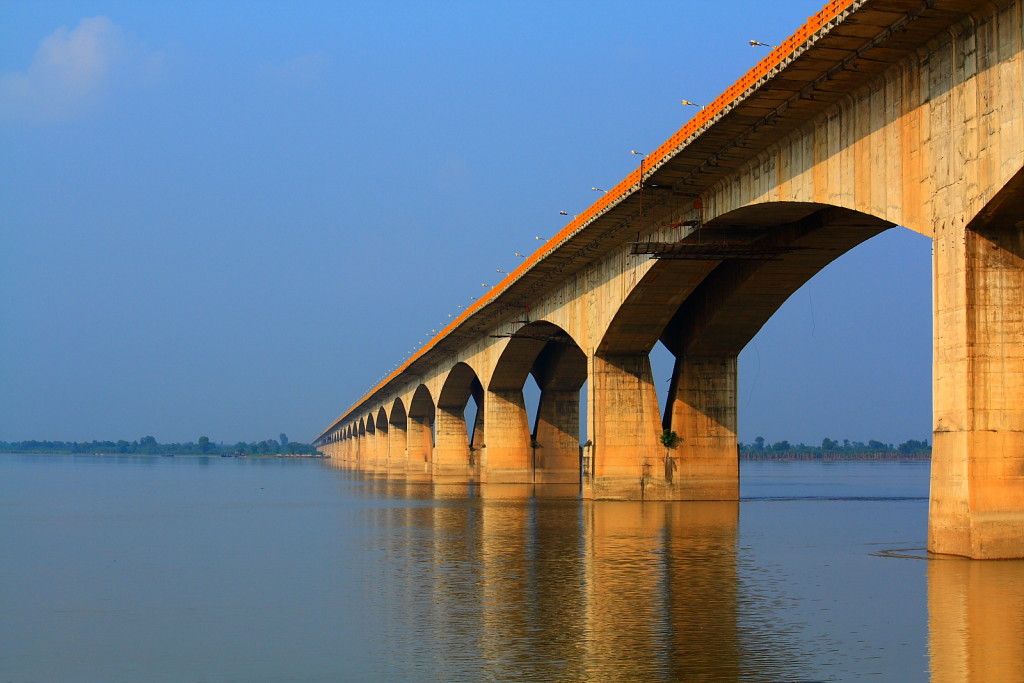 Nepali Mandir: This is a beautiful Shaivite mandir(temple) situated on the bank of the confluence of rivers Ganga-Gandak. The temple was an initiative of Mathabar Singh Thapa, the army commander of Nepal. It was built around 1847. The temple is a fresh take in terms of design and architecture of the building.

Pataleshwar Mandir: The temple is dedicated to lord Shiva, the lord of destruction (of evils), as per the Hindu mythology. The lord is worshipped here in the form of linga (Phallus) and its is very amusing to know that the linga came out of the soil on its own and it has been in here since time immemorial.

There is also an anthropomorphic image that is worshipped along with the linga. Every year during the Shivaratri, huge crowd gathers to celebrate the festival. The temple is decorated by the bhakts (devotees) in the most ornamented style and with all the love and care for the lord.

Sonepur Fair: Located just 6 kms from Hajipur on the bank of river Gandak, Sonepur is famous for the fair called Kartik Diwas or Harihar Kshetra Mela that takes place every year during the month of October-November. The festival takes place at the time of the full moon. It is revered as one of the largest cattle fairs in Asia (started by Chandragupta Maurya) and stretches from 15 days to one month.

Not just the cattle trade that happens here, there is a lot to do at the fair. Food stalls, bazaar, music, dance, plays, circus and what not. People come here not only from in and around places of country but all over Asia.  The sight of the elephants decorated for the sale purpose is something to look for.
There are good hotels around the place and tourists can also opt for the Swiss tents that are erected near the Gandak bank. You can get tents and cottages during the fair time, arranged by the state tourism department.

One fascinating thing that the visitors notice here in Sonepur is the Stupas  and likewise structures in the town. Patthar ki Masjid architecture has an influence of the Islamic architecture.

Ramachaura Mandir: It is believed that this is the same place where lord Ram had his first mundan ( head shaving ceremony) and stopped in between his journey towards Janakpur. His footprints are worshipped here. Thus, it is no guess that the temple exists here since the time of Lord Ram.

Ram Navmi is celebrated with great pomp and show every year where devotes leave no stone unturned to make it a huge celebration. Bael is offered as a prasad on the auspicious day of Ram Navmi. Fair is also organized during the Ram Navmi celebration. The archaeological excavation from this place has been placed in Patna museum.

Badi and Chhoti Sangat are nearby. Many saints and mahatmas visit the sangats and spend time here. They come here to offer prayer and the sangats are highly respectful in the Hindus.

Bateshwarnath Nath Temple: The temple found in the east of Hajipur is believed to be self-made temple that was sighted from a thousand years old Banyan tree and is said to be the oldest in the state of Bihar. It has been in the existence since the Mughal era.

The temple is a holy place for the Hindus where you can see a large number of devotees from around the country during Basant Panchami and Shivaratri. A small fair is organized every year during the same time. The place her its own beauty and one can’t be but get attracted to it.

The temple is run by an NGO, run and managed by Mithilesh Kumar Singh, (Advocate) secretary of Bateshwar Nath Vikash Seva Sansthan.

Maha Kaleshwar Mandir: The temple has lord Shiva as the chief deity and along with him, there are statues of lord Hanumaan, Goddess Durga, ChitraGupta jee and other Hindu Gods. The temple was constructed with the efforts of the local people.

Shri Maha Prabhuji’s Baithakji at Helabazar: The temple, also known as Aacharya Prabhuji Ki Baithak, is one of the 84 temples in India and has lord Krishna as the main deity. The temple is managed by the trustees of Gujarat. Shri Mahaprabhujee walked barefoot around the country to spread the principles of Pustimarg.

Vaishali Mahotsava: Vaishali is a village located north-west of Hajipur, around 40 km.  Lord Mahavir was born in the village called Kundalpur, just 4km from Vaishali and thus holds a  significant importance in the Jainism.

Vaishali Mahotsav is celebrated every month on Baishaki Poornima, full moon day during April. It is the celebration of lord Mahavir’s birth anniversary. Lord Buddha is said to have visited this place in 3rd century BC.

Places to be visited in Vaishali:

Vaishali has the ancient fragrance to offer with various types of ancient relics and the excavated structures, adding to its already glorified history.

Lord Mahavir was born just 4 km away from Vaishali, in Kundalpur. There are places that are of historical importance here.

Ashokan Pillar: The lion pillar at Kolhua was built from a single red sandstone, with a bell shaped capital of about 18.3 m high. The majestic lion is placed on the top. The pillar beside the stupa commemorates Buddha’s last sermon. It also has a tank called as Ramkund.

Buddhist Stupa-I and II: One of the eight sacred ashes of Lord Buddha was enshrined here in a casket. And, during the excavation in 1958,yet another casket containing the Buddha ashes were found.

Abhishek Pushkarn: The water in the tank was considered holy in the olden days and anyone in Vaishali swearing in was supposed to smear himself  before the ceremony.

Kundalpur: Lord Mahavir was born here and lived the first 22 years of his life.

Raja Vishal Ka Garh: This is a huge mound with 1 km of the circumferences. This was the parliament where the representatives would gather to discuss the problems and find solutions.

How to Reach Hajipur:

Hajipur is just 21 km from the city of Patna and Patna airport is the nearest airport to reach Hajipur. The city is the headquarter of east central railway zone and so it is very well connected by buses, & railways. The state and national highways too are well connected and train stops are good enough. The national highway numbers 19, 77 and 103 are some of the main highways.