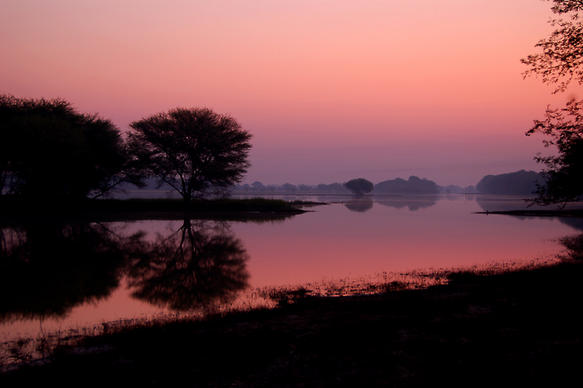 It was one of those winter evenings last year in 2012, as we friends were sitting around having a cup of coffee when we suddenly decided to spend our wonderful weekend in one of the natural places around Ahmadabad. There were a few names suggested out of which, Thor Lake was accepted. It was decided that we set out early next morning on Saturday with a group of 5 friends.

The location of Thor Lake

The Thor or Thol Lake is one of the bird sanctuaries of Gujarat and also a famous fresh water lake with marshes around it. This lake is situated about close to 40 km North-West of Ahmadabad in the Mehsana District. We started out at 4 30 am in the morning with our friends in the car and soon reached our destination. We had done some R&D on the place and had come to know some things about the place. Our main objective was to see the early morning rising sun, see the beautiful local as well as migratory birds and do some photography as well before turning back by afternoon. 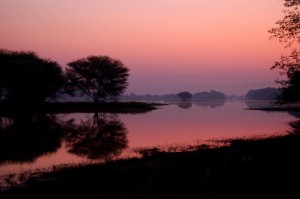 The types of tourists who visit the Thor Lake

We had learnt that this bird Sanctuary gets more than 100 species of Birds every winter as they come to nest in this wonderful part of the world. Every year, many bird watchers and nature photographers make it a point to visit the Thor Lake to not only observe the birds in their natural habitat but also photograph them at close range.

We  saw that the lake is large with fresh water but the water level is not very deep. Fortunately for us, we got a good company of a very good bird watcher, who had good information on all the birds, their habits and their way of living. He gave us a good knowledge in short time and taught us a way to observe the birds from close distance without disturbing them.

The different types of Birds found at Thor lake

There were many birds early in the morning, amidst the rising sun and the cool winds that made up the perfect environment. We saw birds like the Sarus Crane, Flamingos of different types and species, White Pelicans, storks, ducks, etc. flying around and resting with their flocks or groups. We also noticed Geese, Black Ibis, Kites and Eagles, Spoonbills Flycatchers, and also the sparrows, which are becoming rare nowadays from India as well as the World fishing for their food.

The peculiar ways of the birds at Thor Lake

We spent about more than 5 hours at the place, observing the birds and their peculiar ways. Some of us took out our cameras and started shooting the birds. There was a type of discipline among them when they would start ascending or fly up in a group. Couple of ornithologists Scientists had also come there with their students for a practical education on the birds.

The pollution on the water was negligible thus making it easy for the birds to come here from all over the world. The birds not only rely online casino on the fish for their food, but also rely on the various ground roots, insects and paddy fields around the place. The government has also taken necessary steps to declare it as a sanctuary and protect these birds from pesticides and pollution.

The Migratory birds from different countries at Thor Lake

The guide told us that the migratory birds had come from countries like Iran, Oman, Spain, Africa and other parts of the Europe. The guide helped us to identify some species of birds like the pelicans, Northern Pintail, the Swamp Hen, Green Bee eater, Sunbirds, Herons etc., which were not only of different sizes but also had different colors and bird voices.

We also photographed the beautiful painted storks, which have red hair and yellow curved beaks in large groups. The Noisy Mallard Ducks were enjoying themselves in the waters and were swimming in groups with their offspring. We observed that the place provided a perfect atmosphere for the birds during the winter times for nesting and food and live in their natural ecosystem habitat. 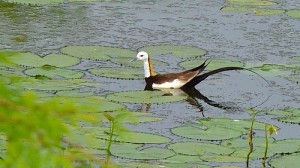 After spending some time on the lake, we came back around 1 pm back to Ahmadabad having our lunch on the way. We sure had got some information on the birds and had photographed some birds in their natural world.

For those who want to go to Thor Lake, they can go by:

Road-Take a private vehicle and taxi to reach the place. It takes about 45 minutes to an hour to reach.

Railway/Airport-Ahmedabad railway station and Airport. From there, go by road.