Gujarat is one of the most vibrant and colorful states of India known for its diverse beaches and incredible touristy spots.

The enthusiasm and energy of Gujarati people are well known. They celebrate each festival with fervor and fun. The state is known for the hospitality of people and their celebratory spirit. The state of Gujarat has the longest coastline in India making it a favorite hotspot for tourists. The beaches of Gujarat attract a large volume of tourists every year and like the rest of the state, they are also famous for their culture and cuisine. 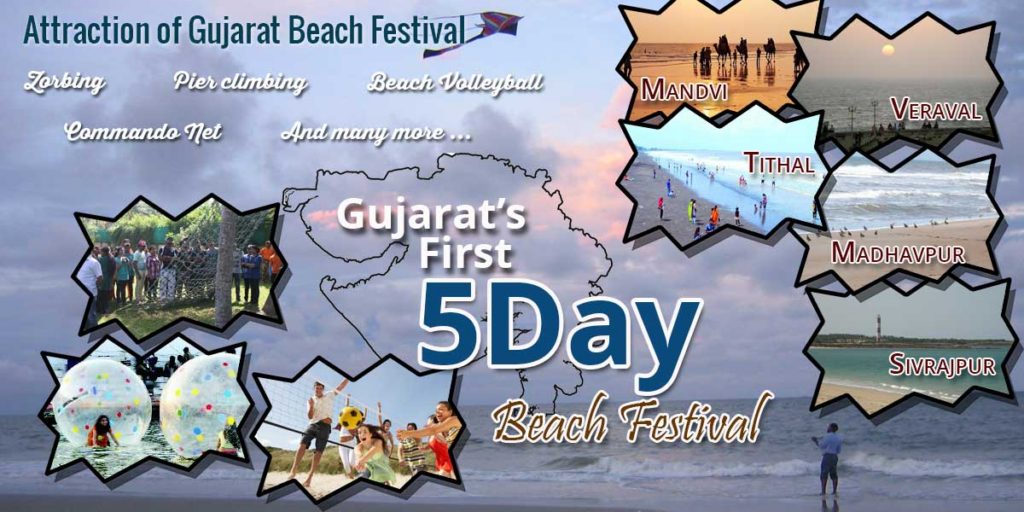 There are a number of beaches in Gujarat that are the preferred destination for fun activities and its festivals. The Beach Festival is organized every year in Gujarat to celebrate the confluence of culture and life that dwells along the beaches of Gujarat. The 16000 kilometers long coastline and the pristine beaches are the major destinations for various festivals and activities. The beaches of Gujarat have always been unspoiled traveler’s destinations.

The Gujarat Beach Festival has been organized by the Government of Gujarat. It will start from 14th May 2016 and will extend up to 18th May 2016. The festival will be hosted by five famous beaches of Gujarat namely Mandvi, Veraval, Tithal, Madhavpur and Shivrajpur.

Major beaches where 5 DAY GUJARAT BEACH FESTIVAL will be held –

How to get there
The beach is accessible via road through state transport buses and luxury coaches by private transports. The major hub is Junagadh that connects to the Mandvi Beach. From Junagadh, you can reach Somnath which is the closest point to the beach. The distance from Junagadh to Somanth is 79km.
You can also reach here via train. The nearest railway station is Veraval which is approximately 6 km away from Somnath.

Places to Stay
City the Village resort and Radisson Hotel are two great luxury options. Besides that, for budget accommodation, you can go for Hotel City Plaza.

Things to do during Beach Festival
– Lazy on a hammock in the sun-kissed sands on the beaches of Mandvi. You can enjoy bathing in clear and cool sea waters of the beach as well as taking a tour of lively fishing hamlets
– Explore the nearby areas especially the windmills and go bird watching.
– Do indulge in water sports and fun activities like Zorbing on the beach which is the main highlight of beach fest.
– Explore the rich heritage and craft of the town by taking a trip to nearby temples, old buildings reminding of princely times and quaint places.
– The other activities like Pier Climbing and Commando Net can be enjoyed along with your children and family during the beach festival
– You can watch the sunset from the pavilion as there will be the musical night concerts organized for the tourists attending the beach festival. Mandvi Beach, being the finest one, will play a host to several local and traditional folk performances.
– You can go visit docks where wooden ships are still built. The beach offers an excellent site for bird watching and photography. You can enjoy the calm blue waters as well as Maharao’s private beach which is accessible with a little fee.

Location: The Titthal Beach is located near Valsad town in the state of Gujarat.  It is the black sand beach split by the Daman-Ganaga river. The major hub is Surat and the beach is famous for being a major tourist site in Southern Gujarat.

How to get there
The distance between Surat and Titthal beach is around 108 km. The road transport, both state and private is available mostly from the eastern end of the city. From Ahmedabad, Surat is around 234 km away.
The distance between Valsad and Titthal beach is mere 4km
There is no train station at Titthal. The nearest train station is Surat which is over 97 km

Things to do during Beach Festival
– Explore the Portuguese territories around the area which has thrived in the area and the influence of trade in the area
– The Moti Daman Fort is worth visiting that was built around 1559. The small Muslim citadel is a marvelous example of architecture.
– The church Lady of the Sea is a prominent building worth paying a visit
– Indulge in snacking during the beach fest. The beach is famous for its savory street food like Dabeli, coconut water, savories and the souvenirs.
– Shop for the souvenirs during the beach festival and indulge in learning local culture and craft. The festival offers great insights into island life and local handicraft made with rich colors.