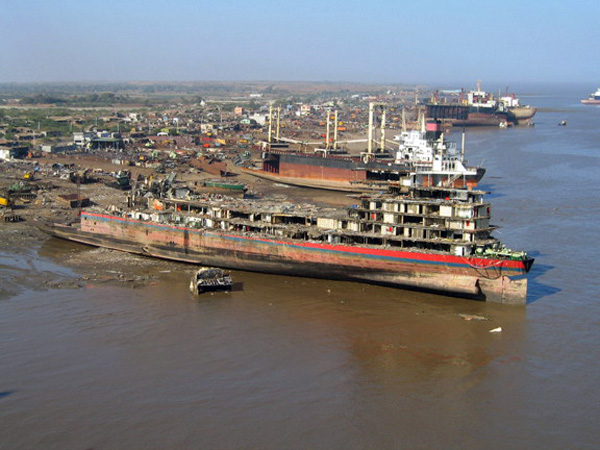 I had gone to Bhavnagar in August 2013, to visit one of my relatives. Being on a leave, I wished to see Alang-the famous ship breaking yard. I took my cousin along with me and we set sail on the road for Alang. We had hired a car, so that we could come back at our convenience. I wished to see the actual ships from a very close distance and see how the dismantling of ships is done.

Alang is a small but industrial town in Bhavnagar district. It is about 55 km away from Bhavnagar. It is famous worldwide for being the largest Ship breaking yard.  The town has about close to 25,000 population of people.

We reached Alang in about an hour. On our way to the ship breaking yard, we saw many small shops selling sea articles, ship furniture and equipments on the road. The equipments and articles ranged from kitchen utensils, crockery, TV, to large furniture as well. We also noticed ship’s lifeboats and small ferries on the sides of the road, along with life jackets.

As we did not know anyone there, we decided to visit a nearby government office and ask an official to show us around and give us some information. We soon found an Officer, Mr. Mehta, who we requested to help us. After verifying our identity, he said that we were not allowed to go near the ships due to security issues, but he could provide us some information about the ship breaking yard. He allowed us to click some snaps from a distance.

The Alang ship breaking yard is famous for dismantling ships, which come from around the world for breaking up. The ships are about more than 25 years old or more. The ships range from small cargo ships, passenger ships, ocean liners, large tanker ships, container ships and even VLCC (Very large crude carrier) about thousands of tones in weight.

The ships are rested at a specified plot of land designated to a specified person, who takes care of the responsibility of dismantling the ship. Manual laborers or workers are hired by the plot owners to start the dismantling and salvaging the ship into pieces. The whole process of dismantling the ship takes about 4 to 6 months, depending on the size of the ship. The first ship breaking activity started in 1983 at Alang
We saw the ships from the distance, where they were being dismantled or being destroyed bit by bit by the workers. On further request, we were allowed to go to the office of one of the plot owners, who gave us some snacks and some further information. There are about 130 plots for the ship to rest, each having an owner or manager.

We noticed that workers were following safety precautions with helmets and other safety equipments. It requires about 80 people to bring the ship to the shore and putting it to rest. It has to be done only during low tide, as there is danger of being washed away to sea by the high tide.

The ships were very big and huge. We were left wondering on the marvel of technology and manual skill and labor involved in the ship building

Mr. Mehta told us that, annually this yard dismantles about close to 450 ships with more than 38.6 million tones of light tons being displaced.  Wow! That is huge!. People are generally discouraged to come near the ship breaking yard due to security issues and their safety as it is a very delicate place to be there without proper experience and information. Ships from Japan, Russia, England, Germany, US and other countries come here for their final destination.

About 200 workers are required to break down each and every part of the huge ships in 4 months. We also learnt that about more than 75% of the ship’s steel can be reused in construction and is a lot cheaper than the primary steel. We also learnt that other usable equipments and parts in the ship like the furniture, utensils, Crockery, electronics, machinery, sea food etc. are sold to traders at wholesale price, which are then sold by the traders to public at large as per the market price.

The ship’s engine is shut down before it is handled over to the officials for breaking. There is a plan made for breaking each and every ship. We noticed huge strong chains, cables and machinery that were used to pull the ship to the beach and keep it steady during the tide.

We noticed the ships that had come to be dismantled. They were very large and we were left wondering about how they will be broken and most importantly, how they are made. They were huge! The work was going on in a disciplined way.

International safety regulations have to be followed for the workers, and also for the managers while the ship is being destroyed, as there can be harsh weather as well as dangerous chemicals and substances from the ship like lead, mercury, radium and heavy metal machinery as well. There are more than 5000 workers in the shipyard who come from various places to work.

Inspection of the ship, both before and after is taken care of by the concerned officers before documentation is made. We noticed some of the documentation papers in each and ever detail lasting over more than 50 pages.

Going back home From Alang.

Luckily, we were invited for lunch, where we had a good time talking more about the place. On our way, we were given a large binocular and a sea Telescope as a remembrance from Mr. Mehta. On our way out, we purchased some crockery, Electronics and other things at very affordable cost. We came back home at about 8 pm after visiting the nearby places