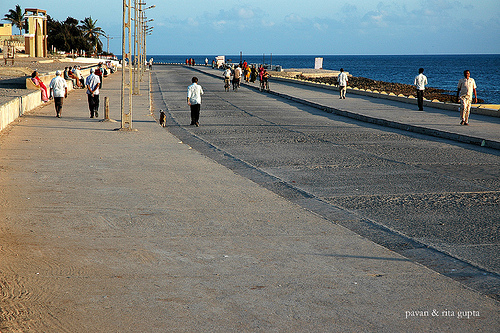 Porbandar is a seaside city in the Indian state of Gujarat, it is also known as Sudama Puri. Best identified for being the birthplace of the Father of the Nation Mahatma Gandhi and Sudama (a friend of Lord Krishna). It is the center focus of Porbandar District. Porbandar data carry vital and discerning info on this small but busy town in the state of Gujarat. Porbandar has developed as one of the significant industrial focuses on the state although it still retains the old city charm.

Porbandar city gains its name from the two different words, Porai and Bandar, denoting to the port of the local Goddess Porai. Porbandar was established as a capital by Rana Sartanji in 1785 AD. The most impressive feature of Porbandar is the city  planning, building Stones and also produces a variety of chemicals manufactures like soda ash, cements, plastics recycling, boxides and many other industrial products.

The local transportation of the city includes the city bus (operated by Kargil Parivahn companies) connecting to major areas of the city and auto rickshaw. Sudama Chowk is the main hub of city buses and private taxis. The city is well-connected by road, rail and air to the various cities across the country. Road The city is connected through National Highway 8B, connecting to Rajkot and Ahmedabad. National Highway 8E Ext connects to Jamnagar, Dwarka in the north and Veraval, Bhavnagar in the south. Porbandar Railway station City is well connected with major cities of the state and some of the major cities in the country. Airport Airport Authority of India (AAI) has built a new terminal building in Porbandar. The Porbandar Airport has daily flight to Mumbai operated by Jet Airways.

Kirti Mandir: Kirti Mandir, the birth-place of the father of our nation, Mahatma Gandhi, is the main centre of attraction for the tourists. It was built by Shri Nanji Kalidas and Shri Purushottam Mistry.

Tara Mandir (Planetarium): All celestial bodies like stars and planets are projected scientifically by special effect movies on an overhead round screen in a theatre and explained elaborately to the joy of the viewers.

Chowpatty: Porbandar’s coastal line is just half a kilometer away from the city. Popularly known as Chowpatty, it is one of the main attractions for the local population as well as tourists, to visit and enjoy the beautiful scenery throughout the year.

Bharat Mandir: Pictures, sculptures and symbols and portraying Indian culture and religion have been exhibited in this place. It is the mirror of Indian tradition.

Sudama Mandir: Extremely poor but self-respected Sudama and Krishna’s friendship brings tears of joy, when remembered. It is in memory of this Sudama that a temple has been built in the heart of the city, known as Sudama Mandir.

Bird Sanctuary: Porbandar is a heaven for birds with huge flocks of flamingos, pelicans, ducks etc. seen in the creeks.