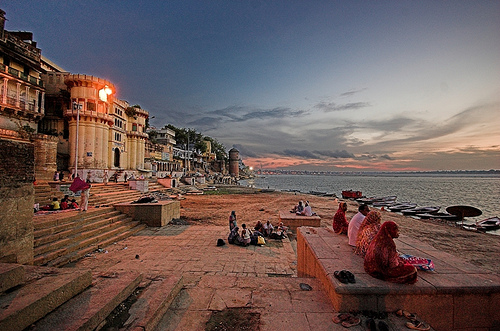 The Famous Assi Ghat is situated near the confluence of Rivers Ganga and Asi. This ghat is in the southern part of Varanasi. Lord Shiva is worshipped in this city as the main diety. There are many shivling temples of Lord Shiva situated in the Assi Ghats. When I reached the ghats, there was a usual cremation taking place by a family, whose member had passed away. The place is known for cremating the dead also. On my way to the ghats, I had seen large number of people in the local market and the roads roaming and going to their daily tasks. There was no place to walk in the narrow lanes.

Importance of the Ghats

The Assi Ghats are mentioned in many sacred Hindu Texts and Puranas. As I learned from my local friend, thousands of people come here to take a holy dip in the River Ganges in the months of January to April, during a solar eclipse and other sacred days. It is a very silent place to sit on for some time and contemplate on life. I could see many travelers and foreigners in this place enjoying and inquiring about this place.

I did my holy bathing in the Ganges river and paid my worship to Lord Shiva. I then hired a boat and saw myself enjoying the cool water of the River Ganga with the boatman handling the boat. The boatman told me that the Ghat looks different in the early sun-rise in the morning as well as the sunset in the evening.  This ghat is visited by about more than 20,000 people during the major festivals.

Extra information of the places around the Assi Ghat

Other than the Assi ghat, there are more famous ghats called Manikarnika Ghat and the Dasaswamedh Ghat. The former is the largest crematorium and burning ghat in Varanasi.

The best time to go to Varanasi is from October to March. Summer season can be avoided. There are many good economic hotels to stay in. Dharamshalas are also situated in good locations.

Nearby places to visit are Benaras Hindu University, Sarnath, The Sarnath Museum, Tulsi Ghat, the Kashi Vishwanath temple and other temples.