The world is a book and those who do not travel read only one page, but I am a travel freak; who loves to explore the places where tradition and stories have become grand.

Last month while I was at ISKCON temple, Ahmedabad; I heard few saints talking about the beautiful land of Vrindavan where Lord Krishna and Goddess RadhaRani shared their beautiful love moments. I was so much inspired of those stories that I used to watch on TV screen; I simply got an idea that I should visit Vrindavan. 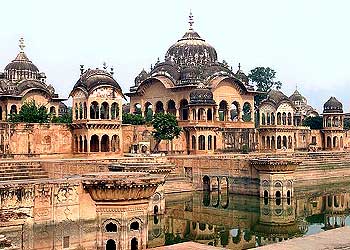 I booked my tickets from Ahmedabad to Delhi and after landing to Delhi; I hired a cab and headed for Mathura, the birthplace of the deity Lord Krishna. My experience of travelling to Mathura was simply amazing and speechless. As the city was coming near, I started experiencing the fresh soul within me; who actually craved for such spiritual vibes. I was dying to visit Shri Krishna Janmabhoomi but then I decided to get fresh, place my luggage and then step down at such heavenly places.


I did not stayed in any hotel as Jaipuria Bhawan is the best place for accommodation in Vrindavan. It had more facilities than what a three star hotel could offer; plus it was located in the center of the Vrindavan town from where travelling to different temples and major tourist points was very easy and safe. If you are also planning to stay at this amazing and comfortable place then you can find more details on their website http://jaipuriabhawan.com/jaipuria-bhawan-vrindavan.html.

After having my bath and breakfast, I left for Mathura to visit the grand and heavenly birthplace of Lord Krishna. Shri Krishna Janmabhoomi is a religious temple located in the crowded city of Mathura. This temple is the birthplace of ancient Hindu God Lord Krishna. It is a prison cell belonging to Kamsa, where Lord Krishna was born. There were thousands of travelers from across the globe that especially came to see the auspicious prison cell. In Mathura district, I also visit famous places like Dwarikadheesh temple, Vishram Ghat on the banks of river Yamuna, Mathura Museum and Birla Mandir. My first day ended exploring the different and beautiful places of Mathura and I decided to explore the beautiful town of Vrindavan, the next day.

Next day when I woke up with a piously gifted morning at Vrindavan, I came to know from the staff members of Jaipuria Bhawan that Banke Bihari Mandir is the most popular shrine at Vrindavan and as it is near from the Bhawan, I should visit it first. I was surprised to see the huge crowd at Banke Bihari Temple when I first stepped in. It was like an unforgettable view and only at that moment, I realized the importance and blessings of Lord Krishna. It is said that, the image of Banke-Bihari was discovered in Nidhi Vana by Swami Haridas, the great Krishna devotee, belonging to the Nimbarka sampradaya.

Some more interesting places that I visited in Vrindavan are Madan Mohan temple, Astha Sakhi Mandir, Sri Sri Radha Govinda temple, Chintaharan Hanuman Mandir and Goverdhan parvat. We all have read the story behind the Goverdhan parvat, the same mountain that Little Krishna holded over his small finger. When I actually visited the Goverdhan Ghat I came across many small rivers and lakes. One of the famous lakes called Kusuma Sarovar bathing ghat also falls on the way and it is one of the most site seeing attraction across Vrindavan. We had an interesting photo session with other travelers over Kusuma Sarovar. Though I came alone to visit this beautiful city, but I made many friends over here; who are also single traveler like me.

Finally it was my last and third day at Vrindavan where I planned to visit the surprising place called SevaKunj; where the local people of Vrindavan believe that every evening after nineteen hours; Shri Krishna and Goddess RadhaRani perform the beautiful RAASLEELA.

SevaKunj is also known as Nikunj Van; it has a mandir for Shree RadhaKrishna. It is believed that RadhaKrishna visit here every night. The nij mandir is decorated for them and all necessary items placed here for the night. This small mandir is decorated with all leelas painted on the walls which are very pretty. This sacred place is known as SevaKunj because it is believed Shree Krishna did sewa (errands) for Shreemati RadhaRani here. This leela is depicted in paintings which show Shree Krishna combing Radharani’s hair, helping her get ready for the RaasLeela.

In the noon, I visited the great ISKCON temple of Vrindavan where I found more foreigners as saints than our Indian people. I was surprised to see the fan following of Lord Krishna and I bowed my head to his deity with lots of respect and love. My heart was very heavy when I was actually leaving for the Delhi Airport but at the same time I was happy to experience such pious vacation of three days even in this busy and hectic life.

I bought a lot of tee shirts, lockets, key chains and other stuff that reflected the image and places of Vrindavan. Also I bought beautifully decorated flutes that are largely sold outside all the temples. After coming back home, I was heartless as: ‘I lost my heart in Vrindavan’!